WHO ARE THE AMISH HISTORICALLY?

The Amish are the most conservative group in the Anabaptist family. Other groups in this family are the Mennonites and the Hutterites. The Anabaptists emerged from the Reformation in Switzerland as early as 1525. The Anabaptists felt that Zwingli, Luther, and other reformers compromised in their stand, and did not go all the way in bringing the church back to a scriptural foundation. The Anabaptists differed especially with the popular reformers in that they rejected infant baptism, and insisted that the church was to be a voluntary brotherhood of adult believers. They were the first to teach separation of church and state, an idea otherwise unheard of in those days. For three centuries after their origin, the Anabaptists were persecuted relentlessly by both Protestant and Catholic authorities. 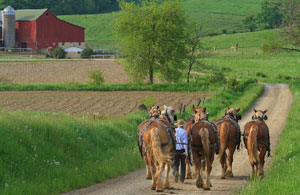 WHO ARE THE AMISH TODAY?

Driven by persecution from their homes in Switzerland, Germany, and Alsace - Loraine, hundreds of Amish emigrated to North America during a period of 150 years, beginning soon after 1720. Today there are Amish congregations in at least twenty-four states and Canada. Also a few have moved to Central and South America. There are really no accurate figures but the Amish number about 70,000 baptized members (baptism occurring about 15 - 18 years old) in about 1100 church districts. The three largest settlements of Amish, (listed in order of size) are in North Central Ohio, Eastern Pennsylvania, and Northern Indiana.


WHO ARE THEY RELIGIOUSLY?

The Amish believe in a close- knit brotherhood of believers where there is love and mutual concern for all members. They do not have a literal community of goods, but help each other voluntarily as the need arises. They feel the church is responsible to care for its own poor, aged, and infirm, (Tim. 5:4, 8) and accordingly do not approve of government subsidies, welfare, food stamps, unemployment compensation, etc. (I Thess. 4:11, 12)

The Amish believe that the Christian should not take part in any violence, either in war or in self - defense. Taking the words of Jesus seriously, “Whosoever shall smite thee on thy right cheek, turn to him the other also,” They have traditionally chosen to suffer loss or injury rather than to protect themselves by physical force. (Matthew 5:38 - 42; John 18:36; Romans 12:19 - 21)

The Amish feel strongly that the Scriptures teach a distinct separation between the church and the world. They believe it is impossible for a church to maintain it’s beliefs and values if its members associate freely with people who hold different values, or none at all. In view of this, they have not always unquestioningly accepted all the cultural changes that have been introduced as progress. Therefore they are still driving horses and buggies, not because they think the automobile is wicked in itself, but because they believe the trend of life the automobile brings with it is breaking down the family unit and the basic structure of the community. They dress as they do because they do not care to be changing all the time to styles designed to achieve more glamour and less modesty. 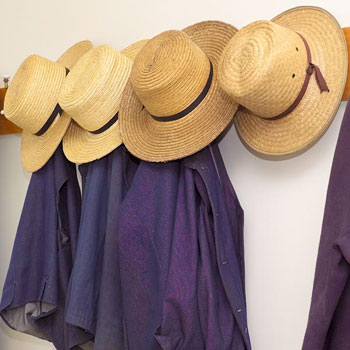 The Amish hold the Bible as the final guide in a changing world. It’s teachings are accepted in simple faith. Many practices that seem quaint or old-fashioned to outsiders are based on Biblical principles:

1. Amish women wear a covering on their heads in obedience to the Bible where it says, “Every woman that prayeth or prophesieth with her head uncovered dishonoureth her head.” (I Cor. 11:5)

5. Amish will not go to court to defend themselves, even when sued unjustly. “Now therefore there is utterly a fault among you because you go to law one with another. Why do ye not rather take wrong? Why do ye not rather suffer yourselves to be defrauded?” (I Cor. 6:7)

6. Membership in world companies or secret societies is objected to on the basis of such verses as II Cor. 6:14, 15.