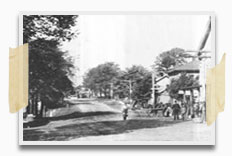 Know today as the heart of Amish country, Berlin was once a tract of government-owned military land. In 1812, John Swigert purchased the land, divided it into 108 lots, and sold it to settlers migrating from the East, mostly Pennsylvania. In 10 years, the lots were all sold and the village of Berlin established.

Berlin is the oldest existing village in Holmes County. The town inherited its name from Swigert who originated from Berlin, Germany, and the area’s first settler Jacob Troyer who came from Berlin, Pennsylvania. Troyer said that the topography of the new village looked much like the topography of his native home in Pennsylvania. During the anti-German hate hysteria of World War I, Berlin changed the pronunciation of its name from Ber-LIN, as it is pronounced in Germany, to BER-lin to avoid suspicion and persecution.

By the mid-1800s, the streets of Berlin bustled with activity. The town included tanneries, dry goods stores, hat factories, churches, blacksmith shops, a chair factory, schoolhouse, and grist mill. Some of these old buildings still stand today, housing a few of the village’s gift shops.

Along east Main Street, the Pomerene house still stands, once inhabited by Holmes County’s most distinguished family. Dr. Peter P. Pomerene, a well-loved and successful practitioner and surgeon, settled in Berlin in 1855. His son Atlee served two terms as U.S. Senator and in 1928 was nominated for President of the United States. The well-preserved house, just next to Sommers General Store, was recently entered in the National Register of Historic Places. 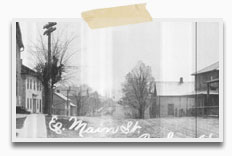 Although a principal Amish settlement today, Berlin was not originally an Amish village. The earliest citizens included Methodists, Presbyterians, Baptists, and Mennonites. Amish settlers started coming in large numbers about 1820 to take advantage of the rich farmland around Berlin. Their farming skills can still be seen today in the neat, productive farms outside of town. Besides farming, some of the early Amish settlers also ran sawmills, gristmills, wagon-making shops, and blacksmith shops.

During the Great Depression, life slowed almost to a halt in Berlin as people struggled just to find enough to eat. But by the mid-1940s, new homes and businesses appeared around town once again. The new stores, along with improved roads and events such as Pioneer Days, brought more locals to town and, in turn, more tourists.

Although outsiders had been coming to Holmes County for many years, curious about the Amish way of life, tourism picked up speed in the late 1980s. New restaurants opened up in Berlin, as well as craft stores, furniture stores, lodging places, and an Amish Farm and Village. Tourism reached new heights in the last decade, and today Berlin draws thousands of visitors every year who come to shop unique local wares, enjoy delicious home cooking, and experience a simpler way of life.