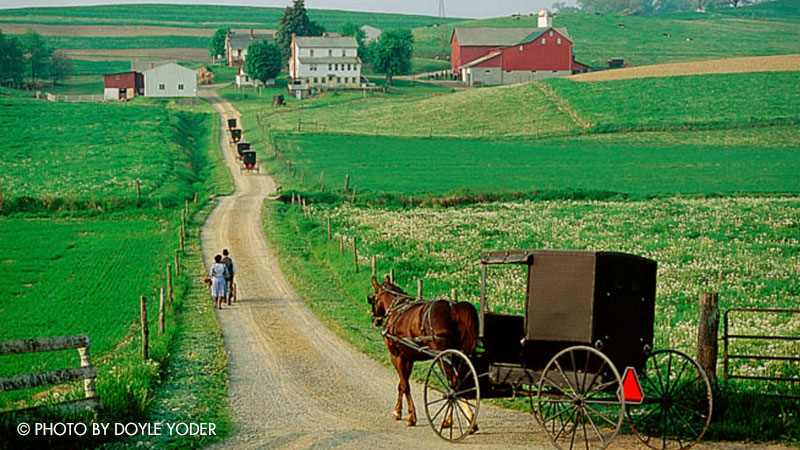 Tobe Amish are a little-known subgroup of Amish that formed in 1940. The group started when Tobias (Tobe) Hochstetler’s fellow ministers excommunicated him for accusations of dishonesty in business. Tobe and his supporters—mostly extended family members—withdrew and started their own church.

Because there was no clear doctrinal issue, Tobe Amish never gained much of a following. This caused difficulties when the young people wanted to marry. With so few congregations, they had trouble finding marriage partners who were not closely related. It was then that the leaders approached the main Old Order Amish and asked to be in fellowship with them.

Although they now interact with the main Old Order body, Tobe Amish have kept some of their distinctiveness. True to their Swartzentruber Amish roots, they do not allow storm fronts (windshields) on their buggies and allow only blue curtains in the home. Tobe men wear two-button, homemade shirts and the women a slightly different style of head covering and more subdued dress colors than other Old Order women. While Tobe Amish have stayed more conservative in some areas, they have allowed other more progressive and technological innovations.

In 1967, this group split when some members broke away, due to differences in beliefs, and started to fellowship with New Order Amish, another subgroup. Since then, the two groups have been known as Old Order Tobe and New Order Tobe. Today New Order Tobe use tractors for farming and allow electricity and telephones in the home. However, unlike the main New Order, they do not hold Sunday school during the “off” Sunday and remain more conservative in dress. Perhaps what sets them apart the most from other Amish is their rejection of the Bann. New Order Tobe seldom, if ever, excommunicate a member and do not believe in shunning those who leave.

Tobe Amish have stayed mainly in Wayne County, with eight churches concentrated in the Maysville and Fredericksburg areas. One daughter settlement is in Adamsville, Ohio, and several churches in Danville, Ohio, are identified as Tobe Amish.