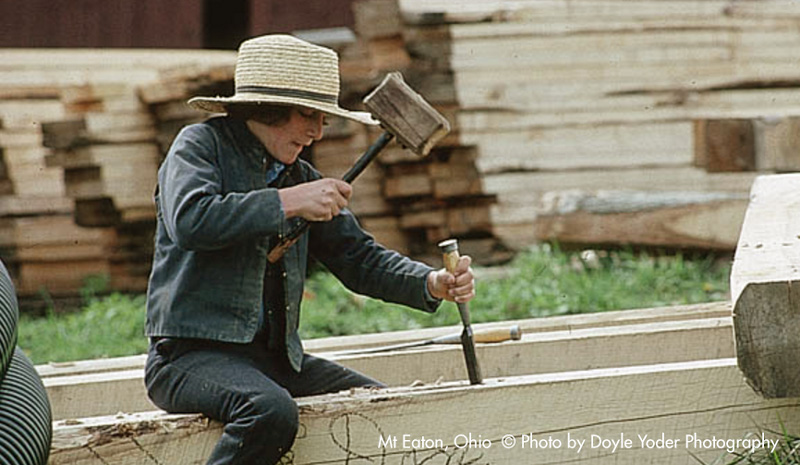 You may have noticed them alongside parked buggies, selling handwoven baskets or fresh produce. Or perhaps you’ve passed their homesteads with their dark red barns, spartan homes, and dirt lanes.

The most conservative sect of Amish in central Ohio, the Swartzentrubers shun indoor plumbing, milking machines, and community phone booths. Their settlements lie mostly along the back roads of southern Wayne County and northern Holmes County.

Swartzentrubers resist change more than most Amish groups. They refuse to adopt “fast time” (daylight savings time) and depend largely on buggy transport, hiring passenger vans only in emergencies. Wood stoves are used for cooking and heating, and windmills and old fashioned hand pumps for securing water. While many Amish families have started small businesses, Swartzentruber families hold fast to farming and live largely off the land.

Among the fastest-growing Amish affiliations, the Swartzentruber group has established more than 65 settlements in 12 states and Ontario. Nineteen of those church districts are located in central Ohio.

Emerging somewhere between 1913 and 1920, this ultraconservative group broke away from the main Amish due to disagreements over the use of the Bann, not unlike their forefather Jacob Ammann who led a church split in 1693 over a shunning issue. Their name originated from two early on bishops who had Swartzentruber as their surnames.

Swartzentruber men can usually be identified by their square haircuts, with hair hanging well below the ears, and their extra wide hat brims and dark vests worn on top of navy or gray shirts. Swartzentruber women typically wear large bonnets and dark dresses that reach the top of black, high top shoes.

While Swartzentrubers maintain a wall of silence with outsiders, they do interact with other Amish. For example, in neighborhoods less populated by their own group, Swartzentruber families might send their children to an Old Order Amish school although the level of education in their own schools is more basic. They prefer to keep to themselves, however, and rarely marry outside their order.

Discouraged from making too much money, Swartzentrubers generally have a lower standard of living than more progressive Amish. If members become too successful, they are encouraged to loan their money interest-free to other members of the group to promote community and equality. Farms are kept small and milk is sold at Grade B, since metal milk cans are used instead of modern cooling systems. Families often sell handwoven baskets or fresh produce to locals and tourists to make ends meet.

If you’re driving down State Route 241 between Mt. Eaton and Mount Hope at night, there’s a good chance you’ll come up on a Swartzentruber buggy. Orange safety triangles and bright electric lights are considered worldly, as are buggy mirrors and windows. You’ll know a Swartzentruber buggy by its dimly lit kerosene lanterns flickering in the darkness.

Sources:
Amish America blog: Who are the Swartzentruber Amish?
An Amish Paradox: Diversity and Change in the World’s Largest Amish Community , Charles E. Hurst and David L. McConnell
The Riddle of Amish Culture, Donald B. Kraybill