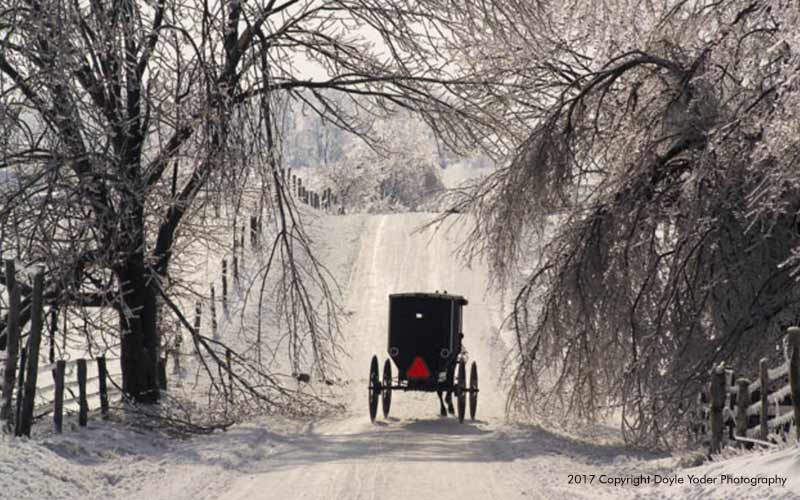 OLD ORDER AMISH: The Group in the Middle

Old Order are the largest group of Amish in central Ohio. Most other subgroups of Amish stem from this “mother” group that had its beginnings in the mid-1850s. It has been said that the Old Order stand on the middle of the Anabaptist escalator—above them are the more progressive New Order and farther down the escalator are the less progressive groups, such as the Swartzentruber Amish.

Although the Old Order have traditionally been less progressive than the New Order, they have in some ways caught up with them in both belief and practice. Most Old Order churches now discourage the use of tobacco and bed courtship. Supervised youth activities, such as Sunday evening singings and volleyball games, are also becoming more common rather than the traditional rumpsringa. However, some Old Order Amish youth continue to participate in parties, buy vehicles, and dress non-Amish until they become members of the church.

Old Order have also become more sympathetic to the New Order way of thinking in spiritual matters. Although they don’t allow youth Bible studies, some Old Order are printing publications that explore the scriptures and encourage their young people to think about the principles behind their lifestyle. They are also now more open to the idea that one can know whether one is born again. However, acceptance of these beliefs are in transition and some Old Order leaders still vocally cling to the old standard that one cannot know for sure whether one is saved.

Looking down the escalator, Old Order are more advanced in farming than any of the more conservative Amish groups. They have adopted milking machines and bulk milk tanks as well as other improved equipment to make farming more viable. Some districts allow the occasional use of a tractor. Mostly though, any modern farm equipment is pulled by teams of horses.

Although farming is still the desired occupation, many Old Order men have left the farms for more profitable occupations, such as woodworking, carpentry, retail businesses, and even clerical work like tax preparing, store clerks, and sales at local businesses. Many of the larger businesses in Holmes County are owned by Old Order people.

Moving off the farms has resulted in families living on smaller plots of land and building more modern houses. Hallmarks of an Old Order home are quality woodwork, solar panels, and battery banks for battery lights and small appliances. Many properties also include a general purpose building to host weddings, church services, funerals, and large social gatherings.

If you are a visitor to Holmes County the Amish you see will likely be the Old Order. More than 140 church districts are scattered throughout Holmes, Wayne, and Tuscarawas counties. Old Order are some of the most progressively dressed Amish, sometimes dressing even more stylish than the New Order.