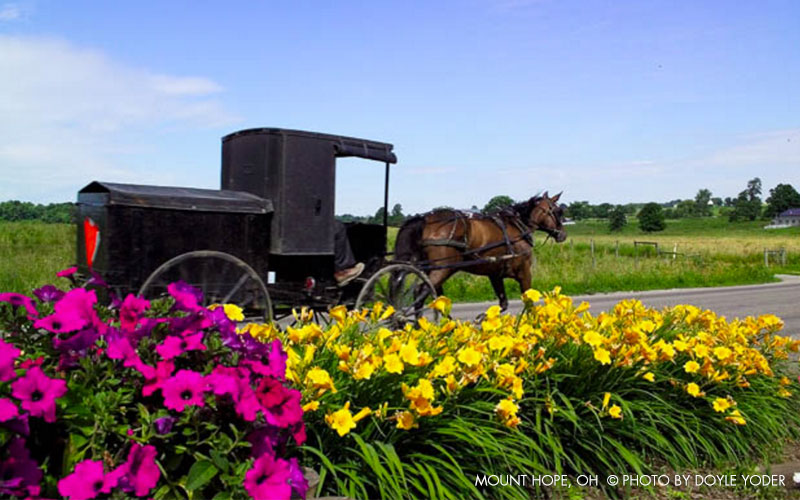 THE DAN CHURCH: A Picture of the Past

In many ways, the Dan church is reminiscent of how all Old Order Amish lived fifty years ago. Families still use ice boxes instead of refrigerators, and cut their grass with push reel lawn mowers. Their dress remains more traditional, with very few store-bought pieces, and the women are required to wear black bonnets when going away. Up until two years ago, when the church allowed bulk tanks, Dan farmers still used old fashioned milk cans to store their milk.

As with many Amish church split-offs, the “Dan church” started out of a disagreement over the issue of shunning. Bishop Andy Weaver in the mid-1950s believed the Old Order church should be stricter in their shunning, and being a confident, articulate young leader, he soon gained a following. Officially called the Andy Weaver church, this breakaway group was dubbed by locals as the Dan gmay, due to all three of the ordained ministers having the name Dan when the church began.

At first there was little difference between the Andy Weavers and the main Amish, but as the Old Order have adopted things like milking machines, hydraulic power, and balers, the gap has widened. Andy Weavers still resist these and other conveniences, such as bicycles, power lawnmowers, and garden tillers. Dan homes appear similar to Old Order homes on the outside, but on the inside they are more modest. For example, only two fixtures are allowed in the bathrooms, so most opt for a toilet and shower inside the room and install a sink outside the room.

A key difference between the Dan church and the Old Order is that the former does not allow unbaptized young people to own cars while living at home. Knowing they must leave home if they buy a vehicle, most Dan young people opt to use a horse and buggy during rumspringa. Although parents keep a tighter rein on their young people, they are also prepared to overlook a certain amount of carousing and rowdiness, including bed courtship, alcohol, and smoking.

Tolerance of tobacco, even for church members, is just one thing the Dan church has in common with Swartzentruber Amish. The two groups also share a strict view of shunning, refusing to lift the Bann on a member who leaves until that member returns to the church. (Old Order typically lift the Bann once a departed member joins another church, even if that church is Mennonite.) Both Swartzentruber and Dan churches also forbid storm fronts and rear view mirrors on their buggies, have more modest homes, and place a high priority on living off the land.

Although many Dan men work in carpentry and masonry, a high number wish to farm. Allowing bulk tanks so their milk can be sold at Grade A was an incentive from the church to keep its members farming. Dan women also spend a great deal of time in gardening and food preservation, unlike more progressive groups where store-bought staples are more common. One reason for this is the prohibition of refrigerators and rental freezers.

Found only in Ohio, the Dan group remains settled largely in Wayne County with a few districts in Lakeville, Peoli, Danville, and Brinkhaven. Subgroups similar to the Dan church can be found in other states, but the church fellowships only with some groups in Lancaster, Pennsylvania, that uphold the same strict shunning as they do, even though those churches are much more progressive. Today the Dan gma, or Andy Weavers, make up about 40 church districts.