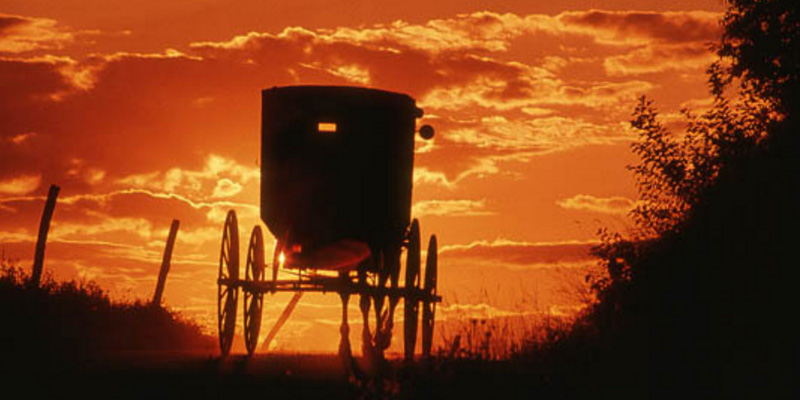 The murder occurred in Pennsylvania at the old home farm of John Hochstetler Sr, located in Pennsylvania on March 4, 1810. The members of the family reported that they did not know whom to suspect, as there was no person seen in or about the house that night, yet in some unaccountable way the blame was fixed on Solomon Hochstetler, John's brother. Solomon Hochstetler had a family and resided about two miles from the scene on a farm. The events of that evening were described as follows. John went to his sugar camp, located about seventy or eighty yards from his house, at about one hour after nightfall.  John's wife, Magdalena, and Barbara Lehman, the unmarried sister of Magdalena, also went to the sugar camp approximately a half hour after John did.  They left John and Magdalena's baby daughter, Susan, asleep in her cradle, covered with a feather blanket.  They had secured the cradle with a piece of homemade tape.  At 2 am the family returned to the house from the sugar camp, they discovered the tape securing the cradle broken, the child removed from the cradle, and the cover was turned over to one side.  They searched the house and discovered their baby daughter suffocated under a mattress.  They concluded the child was murdered by placing her there and holding the mattress down until she suffocated.

It seems that Barbara Lehman, a sister of John's wife, was responsible for fixing the blame on Solomon Hochstetler, it being well known that later she claimed she saw Solomon prowl about the premises, that she recognized him by the peculiar color of the hunting shirt he wore. With a lantern she went to the barn with John to get a horse (as he feared to go alone) to go for help after the child was found murdered. While he was gone, Barbara and her sister remained in the house and again she saw someone peep in at a window. She picked up a stick of wood and made for the window when the face disappeared, and again she took it to be Solomon. The alarm spread and neighbors gathered, and one man observed someone standing by the fire at the sugar camp wearing a broad rimmed hat, which corresponded with Solomon's hat, but then all Amish men wore such hats. John and his wife were the more ready to believe Solomon guilty because it happened they were not on good terms at the time.

It was not until after the child was buried that Solomon learned he was seriously blamed. Then he demanded that the child be exhumed, and he would prove his innocence by touching it in the presence of all, but the father of John and Solomon protested, and it was not done. People in those days firmly believed if a murderer were to touch his victim there would appear some sign of blood, some manifestation. Although Solomon's wife was known for truth and veracity, and she testified that he was at home that evening and was never away from the house all night, still the blame rested upon him. Excepting his immediate family, nearly all his relatives believed him guilty. He had not yet become a member of the church, and now this stood in his way; his brother could never be reconciled with him. About fourteen years later, the mother of the child died. John married a second time, and in 1834 moved to Holmes County Ohio, locating at the edge of Mt Hope. Solomon had moved to Walnut Creek Township of the same county in 1812, but John would never go to see him, nor was Solomon welcome to visit John, who died in 1856 without being reconciled with his brother, Solomon.

Fifty years had passed, but the event was in no wise forgotten. When Henry Yoder was over seventy years old, now residing in Wayne County, Ohio, being so sick that he believed he would die, called his minister to his bedside and made the confession that he killed the child of John Hochstetler, for which Solomon was blamed. Speedily the news was conveyed to Solomon, who upon hearing it wept like a child, and only wished his brother, John, was living so that he could go and see him and have a handshake. Henry Yoder recovered and lived for several years.

Henry Yoder was desperately in love with Barbara Lehman, which was not reciprocated, and he blamed John and his wife for alienating Barbara against him, in which he was not mistaken. The fourth of March 1810, was Sunday, when evidently he expected to have a chance to press his case; and seeing both Barbara and her sister going to the sugar camp, he thought she was trying to dodge him, and in this evil hour committed a deed that haunted him all his lifetime, and dear little Susan, became the innocent victim. Whether Barbara Lehman was honestly mistaken, or whether she was trying to shield a rejected suitor, remains a matter of doubt, but Yoder after his confession, said he wore just such a hunting shirt as Solomon, yet the question remains why did she not tell the jury, or if she did why did the jury not mention it in their finding. Because Henry confessed the murder to a minister, the testimony of the minister was not permitted in court as he was a spiritual advisor. The other factor was nearly all involved had died and so there was no way to verify the facts outside of the confession. Because of this, Henry Yoder was never prosecuted.

Sources: Descendants of Jacob Hochstetler, the immigrant of 1736, Harvey Hochstetler